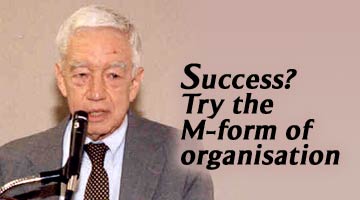 Alfred duPont Chandler, Jr. is well known for being one of the first thinkers to successfully incorporate historical understanding of management trends into his analysis, thus providing a sound platform to consider future trends. His work on the relationship between strategy and structure remains pivotal to modern strategic thinking.

A historian, teacher and manager, Chandler's influence is based on three major works: Strategy and Structure (1962); The Visible Hand (1977), for which he won the Pulitzer Prize; and Scale and Scope (1990). Although there are common themes in all three books, they look at management in different ways.

Strategy and Structure looks at corporate responses to the challenges of growth and diversification, and shows how managers responded to the strategic imperatives they faced by developing new forms of organisation. The Visible Hand argues that these new forms were accompanied, and in part enabled, by the development of management as a profession. Finally, Scale and Scope explains the success of large American businesses as compared to their German and British counterparts.

Chandler suggests that due to the failure of the two countries to develop professional management until recently, they have lagged behind the United States.

Chandler argues that this success was, in part, based on the early adoption of a new form of business organisation, the multi-divisional form or M-form, which allowed these corporations to grow and diversify. The diversification proceeded the establishment of a number of semi-independent operating divisions, focused either geographically or on a particular group of products.

All the divisions were subject to supervision from corporate headquarters yet were required only to conform to the overall strategic plan while the operating responsibility was assigned to the divisions themselves.

Chandler further argues that virtually every successful company in the US between 1920 and 1960 adopted this organisational form, and that it played a central role in the rapid growth of American businesses through this period.

The M-form was not a rigid model: it could be adapted in any number of ways, and Chandler details how the four corporations adapted the form to their own needs. This brings Chandler to his most important conclusion, "The thesis . . . is then that structure follows strategy and that the most complex type of structure is the result of the concatenation of several basic strategies."

In each of the four cases he describes, the companies were first faced with the need to make a fundamental change in strategy, due to changes in technology and changes in their core markets. The strategic response in each case was diversification and the M-form was adopted as a means of carrying out this strategy.

To succeed, the M-form required the existence of a strong and professional management hierarchy; and the new decentralised organisations required strong management both at the headquarters and in the divisions.

In his next major work, The Visible Hand: The Managerial Revolution in American Business, Chandler considers how the rise of large-scale business in the US was accompanied by the growth of a professional managerial class and the separation of ownership from control, a phenomenon which Chandler strongly endorses.

He starts from a picture of the US business before the Civil War: small in scale, localised, usually family-owned and managed. Larger businesses began to emerge "when administrative coordination permitted greater productivity, lower costs and higher profits."

Activities carried out between firms (distribution, production of components, marketing, etc.) could now be internalised and carried out within firms, provided the firms had the managerial resources to do so. More management makes possible more internalisation, with more control and greater economies of scale.

Hence the title of the book, The Visible Hand, a direct reference to Adam Smith's "invisible hand" of market forces that guides and regulates the economy. Chandler substitutes, in part at least, market forces for human agency: the visible hand is that of professional management, which guides and controls the destiny of the corporation.

The introduction of professional management both accompanies growth and is a pre-requisite for it. As business grows, salaried managers within its upper ranks become highly skilled and their work becomes more technical and complex.

With growth in size and complexity owners find that they can no longer control the business directly, and increasingly delegate control to managers, leading to separation of ownership and control.

This in turn leads to change in strategic emphasis: professional managers, says Chandler, are more likely to emphasise long-term growth and stability rather than short-term profits.

Finally, the size, strategic direction and economic power of these large business units changes and alters the economy itself, especially the industry sectors in which they operate. The final picture is a transition to what Chandler calls "managerial capitalism," in which the chief decisions that determine the present and future trajectory of the business enterprise are made by professional managers.

The first industries to adopt professional management on a large-scale were the railways and telegraph companies, where the problem of management across large spatial distances was acute.

As other industries began to grow, companies borrowed the techniques developed by the railway and telegraph industries; and indeed, several of the most prominent business managers of the late 19th century had at least some background in either industry.

The telegraph and railways had a dual function: they developed techniques for coordinated management of large organisations over a large geo-graphical space, and also provided marketing and distribution opportunities, which made physical growth possible.

Chandler cites the example of the meat-packing industry, firms such as Armour and Swift, which developed large vertically integrated organisations based on the large-scale rearing of livestock in the West and Midwest and selling meat in the urban centers of the East.

Other industries, such as steel, coal and oil, also grew in this fashion. As firms and sectors grew, they developed management hierarchies and underwent strategic transformations, finally creating the managerial revolution.

Chandler argues in favour of managerial hierarchy. He says it is essential for continued growth, and once established can become an organisation's greatest source of power. In the 1920s and 1930s, the US led the world in development of professional management hierarchies, enabled growth of the M-form, raising the US economy to world dominance.

German firms tended to adopt a model of business much like that of the US, characterised by hierarchies of professional managers, but for a variety of social and cultural reasons they preferred to conduct networks of inter-firm alliances rather than engage in full-scale competition.

Professionalism, of this kind, in his view, did much to explain Germany's economic resurgence after the Second World War. The British economy, on the other hand, comes in for severe criticism.

The United Kingdom clung for far too long (in Chandler's view) to a model which he describes as "personal capitalism" where the owners of businesses continued to exercise control and refused to hand over control to professional managers. This lack of evolution and failure to separate ownership and control stifled the growth and competitiveness of British industry and was a major factor in its post-war decline.

Chandler's work changed the way we perceive management. He notes how changes in one sector, such as transportation, can have knock-on effects on other sectors, how a revolution in one business in one field can lead to widespread change.

His work on the relationship between strategy and structure remains pivotal to modern strategic thinking. It is Chandler who created the awareness that management is a historical concept.

His style of historical analysis, if not necessarily his conclusion, provides a sound platform for the consideration of future trends, and brings the role of historical understanding to the forefront of management thinking.